Nuclear weapons are inhumane weapons that cause extreme suffering and catastrophic humanitarian consequences. In an explosion of a nuclear weapon, the intense heat can cause bodies to completely vaporize. The pressure wave from the blast travels for kilometers and tears apart buildings and infrastructure. Nuclear weapons produce large amounts of radiation that kills immediately, but also slowly through radiation sickness and cancer.

A nuclear explosion can cause damage to people in a number of different ways – both immediately and in the longer term. Nuclear weapons harm both humans and fetuses in the womb. In the event of a nuclear explosion, hospitals are also destroyed and healthcare workers killed, making it even more difficult to help the injured who survive. 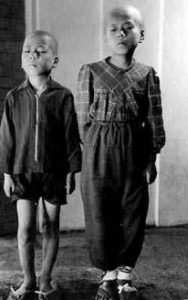 Children affected by radiation damage after the atomic bombs in Hiroshima.

One of the major differences between nuclear weapons and conventional weapons is that nuclear weapons also kill and injure through radiation. Radiation damage is caused by gamma and neutron radiation released upon detonation and ensuing radioactive fallout that damages the body’s cells and causes mutations that result in cancers and other health issues.

When cells are irradiated, the energy contained in the radiation is transferred to the cell. Radioactive radiation also causes damage to DNA, the genetic material of living cells. A cell can repair such damage to a certain level, especially if the damage is not very severe. However, incorrect repairs can occur that risk leading to cancer.

Cancer generally needs to develop over several cell generations, and it can therefore take decades before it’s detected. Blood cancer (leukemia) develops after a few years, while cancerous tumors in internal organs take longer to develop.

In pregnant women, the fetus can be damaged by the radiation, resulting in miscarriage or malformations. Radiation can also damage the genetic material and create adverse health effects for future generations.

At higher radiation levels, the cell dies. In parts of the body where cell turnover is normally high, such as in the gastrointestinal tract or bone marrow, the cells cannot be replaced quickly enough and the tissue ceases to function. This can be fatal.

The higher the radiation dose, the earlier disease symptoms develop. Depending on how high the dose is, three disease outcomes occur in people who are exposed to radiation.

Long after a nuclear explosion, radioactivity will spread both in the area around the detonation and, depending on the weather and wind, can extend far beyond the explosion site. This is called radioactive fallout. People can be affected by the fallout in multiple ways: coming in direct contact with radioactive particles through exposure via skin contact and inhalation of the fine dust that rains down after detonation, or ingestion of radioactive particles. This second scenario can occur by, among other things, drinking milk from cows that have grazed contaminated grass or drinking from contaminated water sources.

The absorbed radiation dose is given in the unit Gray. In the past, the unit rad, which corresponds to 0.01 Gray, was often used. Different types of radiation (alpha, beta and gamma) have different biological effects, the unit Sievert is usually used in medical contexts as a measure of the radiation’s biological effect.

The unit is named after Rolf Sievert who was a radio physicist at Karolinska Institutet in Stockholm, Sweden. Sievert is a large unit (1 Sv can cause acute radiation damage), which is why it is common for the dose to be stated in millisieverts: 1 mSv = 0.001 Sv. When you specify radiation doses, you usually mean whole-body dose, i.e. the whole body is exposed to radiation. The lethal whole-body dose for humans is considered to be in the range of 3–5 Sv. 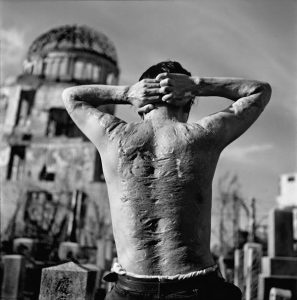 The enormous heat wave that occurs in a nuclear explosion cause serious burns. Heat moves at the speed of light and it is therefore not possible to protect yourself if you have not been warned in good time. Further away from the area of ​​fatal injuries, many people will suffer burns, especially if the skin is exposed.

Clothing that catches fire will lead to severe burns. Treatment of burns is among the most resource-demanding forms of care available. Caring for people with burn injuries therefore represents a major challenge for healthcare in the event of a nuclear explosion.

In normal cases, when neither hospitals nor medical personnel have been knocked out by a nuclear explosion, the number of care places for severely burned victims is extremely limited in all countries. 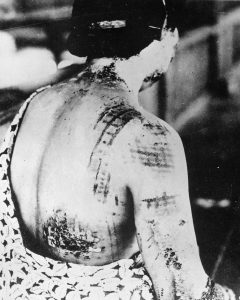 In Nagasaki, it is estimated that 95 percent of all casualties suffered from burns. In Hiroshima, the figure is 60 percent. These numbers come from reporting done by the Manhattan Engineer District (MED), which estimates significantly lower numbers of both dead and injured than many others do.

If we look at casualties, MED calculates that 69,000 were injured in Hiroshima and 25,000 in Nagasaki. It is not difficult to calculate that if 95 percent of all the injured suffer from severe burns, the burn beds in the hospitals are not enough. Nor can we expect that immediately after a nuclear explosion there would be capacity to transport patients to intensive care in other countries.

The risk of cancer will increase among those who have survived the nuclear explosion but have been exposed to radioactive radiation. The long-term effects of radiation include a range of diseases, including cancer, such as breast, thyroid, lung cancer and leukemia. The risk of leukemia is highest if one is exposed to radiation at a young age.

The effects of the atomic bombings of Hiroshima and Nagasaki continue. It have led to an increased incidence of cancer among the survivors. One can see a clear increase of cancer cases in these cities compared to other similar areas that can only be explained by the effects of the nuclear explosions.

Both in areas around nuclear test sites and after the bombings of Hiroshima and Nagasaki, an increased number of birth defects has been observed. Because rapidly growing cellular tissue is very sensitive to radiation, the fetus is particularly vulnerable.

Fetal radiation exposure has been shown to increase the risk of childhood cancer. One could also see an increase in brain damage in individuals who were exposed to radiation in the womb from the atomic bombings of Hiroshima and Nagasaki.

Extensive research has been done on animals illustrating that radioactive radiation gives rise to hereditary malformations. It has not been possible to concretely prove that the same applies to humans. This may be due to the fact that many gene changes are recessive, i.e. only cause changes when both parents carry this condition. Such genetic damage is very difficult to demonstrate in population studies, partly because their effects don’t reveal themselves until later generations.

Children of Hiroshima and Nagasaki

Studies have shown a clear increase in the number of disabled children of mothers who were exposed to radiation during the atomic bombings of Hiroshima and Nagasaki. Out of 1,600 studied children of these women, there were 25 cases of disability, compared to 5 in the rest of the population.

Within a decade of the atomic bombing, researchers had been able to document brain damage and disabilities in children born to mothers who were within 2 kilometers of the bomb’s blast site. In recent years, new analyses have been made of previous data and concluded that there is a clear connection between how far along a woman’s pregnancy was at the time of the bombing, and how serious the brain damage the child suffered.

Fetuses between weeks 8 and 15 are the most vulnerable and have developed the most severe brain damage. Functional impairment, small head size, and poor results in school and on IQ tests are examples of the effects of birth defects that can be caused by radiation.

However, researchers at the Health Science Center of Texas University point out that it is not necessarily only the radiation that has caused functional impairments, but that other effects of the atomic bombings may also be at the root. The researchers mention, for example, that several of the pregnant women lost consciousness in connection with the pressure wave or because they were hit by flying objects. Malnutrition, infections, and severe stress and anxiety over the ongoing war may have also played a role.

Today, these children have grown up and many are having a hard time in Japanese society. They remind those around them of the terrible events at the end of World War II that modern Japan does not want to think about. Many of them have been placed in various institutions and have had difficulty securing education and jobs.

Medical care after an atomic bomb

We expect a doctor to be on hand when we get sick. A call to the health center or, in the worst case, an ambulance to the emergency room is all that is needed for a competent doctor to be available.

But what if a nuclear explosion has damaged all the hospitals and medical centers in the city, all the roads are more or less destroyed, all the electronic equipment is out and hundreds of thousands of people need medical care? What happens when hundreds or thousands of doctors, nurses and other healthcare professionals have died or been injured so badly that they cannot work to save others?

In Hiroshima, 270 of 300 doctors and 1,654 of 1,780 nurses were killed or injured immediately, and about 80 percent of the city’s hospitals were destroyed. At the largest Red Cross hospital, six doctors and ten nurses were healthy enough to work, only one of these was completely unharmed: Doctor Sasaki.

Injured, bleeding, burned, broken, vomiting, crying and screaming people tumbled into the hospital in droves. At least ten thousand people went to the hospital for care. Doctor Sasaki could not save everyone, or even a small part. He did what he could to keep people from bleeding out, but soon his patients began to develop symptoms of radiation sickness: uncontrolled bleeding, serious problems with internal organs, hair loss, extreme susceptibility to infection.

It was practically impossible to save anyone, as the entire city’s medical facilities had been destroyed and almost all the doctors themselves had died or been injured.

The World Health Organization (WHO) stated in 1983 that nuclear weapons pose the greatest immediate threat to human health and survival, and this is still true today. Doctors worldwide get involved in the fight to abolish nuclear weapons is therefore logical and natural. 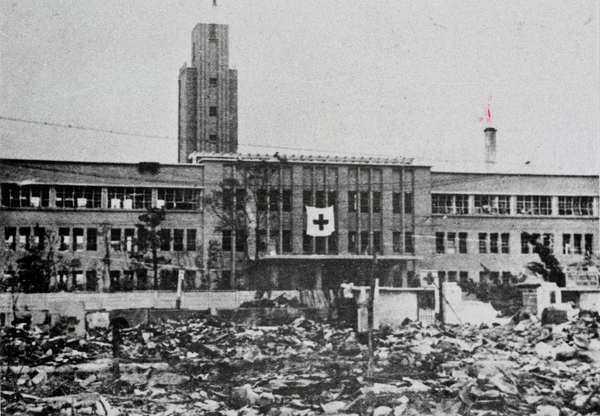 One of the few hospitals in Hiroshima after the atomic bomb in 1945.

The world of rats and cockroaches

You often hear that the only people who would survive a full-scale nuclear war are cockroaches and rats. It may not be entirely true, but many pests and insects have a better chance of survival than us humans.

A nuclear war will make it difficult for people to take care of their hygiene. The water will be polluted, people will be forced to live in cramped quarters, it will be difficult to dispose of waste.

The insects and microorganisms that have great resistance to radioactive radiation will increase. Poor hygiene and an increase in insects will lead to an increase in the number of people contracting infectious diseases, which may increase the occurrence of epidemics and pandemics.

The use of nuclear weapons would also give rise to famine as food sources are contaminated and depleted. This also lends itself to an increase in disease outbreaks.

Damage from a nuclear explosion

In a nuclear explosion, there are mainly three damage mechanisms that kill and injure people: the blast wave, the heat wave and the radioactivity.