The UK has been a member of the Non-Proliferation Treaty (NPT) since 1 July 1968, the day the treaty opened for signatures. Because UK developed nuclear weapons before the NPT was negotiated in 1968, the country is defined as a nuclear weapon state by the NPT. That means that UK are allowed to keep their nuclear weapons while they pursued effective measures towards disarmament. The UK is also a party to the Comprehensive Test Ban Treaty (CTBT) since 1996. The UK is not a party to the UN Treaty on the Prohibition of Nuclear Weapons (TPNW).

UK began studying the possibility of developing an atomic bomb in 1941 under the code name of Tube Alloys. Work continued in 1943, when British scientists participated in the Manhattan Project in the United States, the project that developed the first atomic bomb. After World War II, UK resumed its domestic nuclear weapons program and conducted its first nuclear test in October 1952, labeled Operation Hurricane.

Between 1952 and 1991, UK conducted 88 nuclear tests, 64 of which were in the atmosphere. The test sites were in Australia, Kiribati in the Pacific Ocean and at the Nevada Test Site in the United States. The tests resulted in extensive radioactive fallout and had major consequences for the people living in the areas. 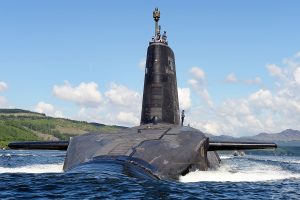 The UK currently has 225 nuclear weapons. Today, the nuclear arsenal consists of only one nuclear weapon system: the country’s fleet of submarines. There are four submarines and each submarine is equipped with 16 missile tubes which in turn are armed with approximately 40 nuclear warheads per submarine. Each warhead has an explosive power of about 100 kilotons of TNT.

One of the four British submarines is constantly on active patrol at sea. Two of the three remaining submarines can be deployed at short notice, while the fourth submarine is decommissioned for repair and maintenance.

The patrolling submarine has a low level of readiness and can only fire its missiles a few days after receiving firing orders from the British government. The missiles on board are not pre-programmed to attack fixed targets, but require programming.

In March 2021, the United Kingdom released a new nuclear weapons policy in which it was revealed that the country plans to raise the cap on how many nuclear weapons it can have in its nuclear arsenal to a maximum of 260 nuclear weapons, instead of reducing the arsenal to 180 nuclear weapons as previously announced. The UK has received much criticism for the decision, which is a break from the trend as the UK’s arsenal has been consistently reduced in number for 30 years.

Back in 2016, the UK parliament voted through a modernization of its Trident missiles, but that decision did not mean an increase in the number of nuclear weapons.

United Kingdom has what is known as “continuous deterrence at sea” in that they constantly have a nuclear-armed submarine out at sea. In the event that the UK is attacked and the government destroyed, the Prime Minister has already written a letter on taking office with instructions on how the submarine should act in the event of a nuclear response. This letter is said to contain options such as “Put yourself under the command of the United States, if still there”, “Go to Australia”, “Take revenge” or “Use your own judgment”.

In mid-March 2021, the UK released a new nuclear weapons policy, Global Britain in a competitive age. Former Prime Minister Boris Johnson’s government wrote in the new policy that the reason for the new increase is, among other things, the threat from Russia and China, but also technological development. According to the policy, the UK no longer rules out using nuclear weapons against external threats other than just nuclear threats. The cap on the number of nuclear weapons was also raised by 40 percent.

The new policy lowers the threshold for nuclear weapons use. UK Secretary of Defense, Ben Wallace, defended the decision citing Russia’s development developed of a new ballistic missile defense and therefore UK must have a credible deterrent.