The United States has been a member of the Non-Proliferation Treaty (NPT) since July 1, 1968, the day the treaty opened for signatures. Since the US developed nuclear weapons before the NPT was negotiated in 1968, the country is defined as a nuclear weapon state by the NPT. That means that the US are allowed to keep their nuclear weapons while they pursued effective measures towards disarmament. The United States is a signatory to the Comprehensive Test Ban Treaty (CTBT) but has not ratified the agreement. The US is not a party to the UN Treaty on the Prohibition of Nuclear Weapons (TPNW).

The United States is the only country to have used nuclear weapons in war, against the Japanese cities of Hiroshima and Nagasaki in 1945, during World War II.

During the Cold War, the United States and the Soviet Union produced more than 70,000 nuclear weapons. The US conducted 1,032 atmospheric, underwater, and underground nuclear weapons tests at sites primarily in Nevada, Alaska, and the Pacific Ocean that resulted in extensive radioactive fallout and had major consequences for the people living in the areas. The US conducted its last nuclear test in 1992 but has yet to ratify the Comprehensive Test Ban Treaty (CTBT) negotiated in 1996.

Since the 1980s, the United States has dismantled and destroyed a large number of nuclear weapons as a result of bilateral disarmament agreements with the Soviet Union/Russia.

The US has a so-called nuclear triad, which means it can launch nuclear weapons from land, from aircraft and from submarines. The US has 5428 nuclear weapons in its arsenal, both so-called strategic and tactical. Of these, around 100 are deployed through NATO in Belgium, Germany, Italy, the Netherlands and Turkey. 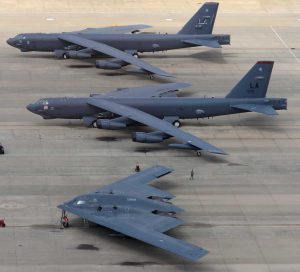 B-52H Stratofortress and B-2 Spirit

The US’s nuclear arsenal is undergoing a major overhaul which, according to information, will cost 494 billion US dollars until 2028 and for the next 30 years the sum will be approximately 1.2 billion US dollars. It includes both the development of current weapon systems as well as the production of new weapon types. Among other things, a new type of nuclear-armed submarine is being developed, which will be delivered around 2029.

The US is also planning a completely new land-based intercontinental ballistic nuclear missile (ICBM) to replace the long-range Minuteman III missile. At the moment, the new missiles go by the name “Ground-Based Strategic Deterrent” (GBSD) and are planned to be ready by the end of the 2020s. The cost of these new missiles is expected to land at around 100 billion US dollars. Currently, 400 of the older long-range Minuteman III missiles are located in several US states. With the new ballistic missile, the number is planned to increase to around 600. Each missile will have an explosive power 20 times stronger than the atomic bomb that was dropped on Hiroshima in 1945, killing hundreds of thousands of people.

In October 2022 came the US’s latest nuclear doctrine, the Nuclear Posture Review, which is more in line with the Obama administration, but have some significant changes due to the development in China and Russia.

The new poster conclude that “U.S. nuclear weapons can be used against the full spectrum of threats: “While the United States maintains a very high bar for the employment of nuclear weapons, our nuclear posture is intended to complicate an adversary’s entire decision calculus, including whether to instigate a crisis, initiate armed conflict, conduct strategic attacks using non-nuclear capabilities, or escalate to the use of nuclear weapons on any scale.’”

The Nuclear Poster Review rejects both a no-first-use policy and sole-purpose policy for U.S. nuclear weapons due the current conditions. It also state that the United States “will not use or threaten to use nuclear weapons against non-nuclear weapon states that are party to the NPT [Nuclear Non-Proliferation Treaty] and in compliance with their nuclear non-proliferation obligations.” 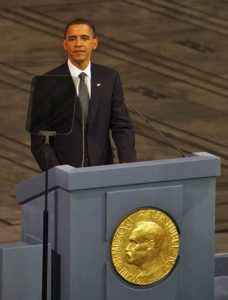 Vision of a world without nuclear weapons

In 2009, former President Barack Obama received the Nobel Peace Prize to both his own and the international community’s surprise. The Nobel committee justified the decision, among other things, with Obama’s vision of reducing the global nuclear threat. Obama received harsh criticism from the US Congress as he implemented only minor reductions in the US nuclear arsenal, but he also started a modernization plan for the US nuclear arsenal.

Sources and other information