While the number of Russian nuclear weapons has been significantly reduced, they gave in last decades undertaken major modernization of its strategic and tactical nuclear weapons and their weapons carriers. Russia justifies its nuclear arsenal primarily for deterrence reasons, but also as a safeguard against conventional military aggression by the US and NATO.

Russia (Soviet Union) joined the Non-Proliferation Treaty (NPT) on July 1, 1968, the same day the treaty opened for signatures. Since Russia developed nuclear weapons before the NPT was negotiated in 1968, the country is defined as an official nuclear weapon state by the NPT. That means that Russia are allowed to keep their nuclear weapons while they pursued effective measures towards disarmament. Russia is a member of the Comprehensive Test Ban Treaty (CTBT)since 1996. Russia is not a member of the UN Treaty on the Prohibition of Nuclear Weapons (TPNW).

In 1949 the Soviet Union detonated its first nuclear weapon and in 1953 the country detonated its first hydrogen bomb. For a time, the Soviet Union built increasingly large hydrogen bombs, culminating in the detonation of the so-called “Tsar bomb” over Novaya Zemlya, which had an explosive power exceeding 50 megatons of TNT. The mushroom cloud was said to have been 40 miles (64 km) high and 19–25 miles (30–40 km) wide, and at a distance of 10 miles the heat was still intense enough to cause full-skin burns (formerly third-degree burns, the most severe degree of burn). 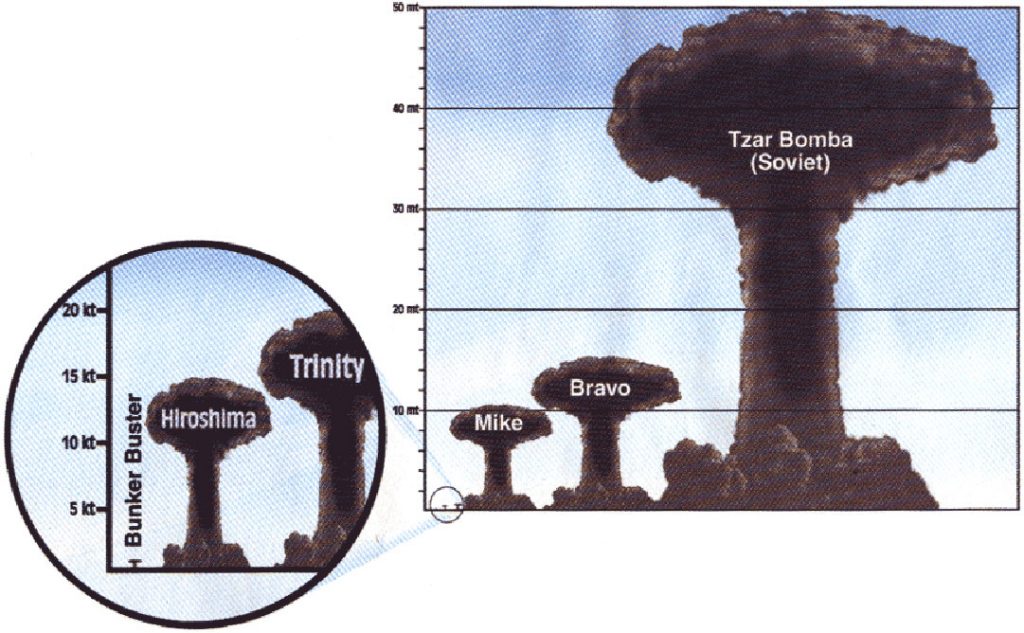 The Soviet Union conducted nearly 1,000 nuclear weapons tests at the Semipalatinsk test sites in Kazakhstan and Novaya Zemlya in the Arctic Ocean between 1949 and 1989. This resulted in extensive radioactive fallout and had major consequences for the people living in these areas.

In the 1980s, the Soviet Union had more warheads than the United States, peaking in 1986. At this time, the Soviet nuclear arsenal consisted of about 45,000 nuclear weapons. The number then declined rapidly, partly due to the country’s economy, but mainly as a result of bilateral disarmament agreements with the United States, such as the INF Treaty (1987) and START I, among others.

After the collapse of the Soviet Union in 1991, nuclear weapons and fissile material stored in Belarus, Kazakhstan, and Ukraine were brought to Russia or decommissioned in accordance with the Budapest Memorandum. Russia is the only former Soviet republic that has retained its nuclear weapons.

Russia has a so-called nuclear triad, which means it can launch nuclear weapons from land, from aircraft and from submarines.

By 2022, Russia is estimated to have 5977 nuclear weapons in its arsenal. The New START Treaty, signed in April 2010, limits the number of Russian and United States strategic nuclear warheads to 1,550 on each side. Russia had to reduce the number of warheads on its strategic nuclear weapons to reach the agreement’s limit. The agreement was extended in 2021 and is valid until 2026. 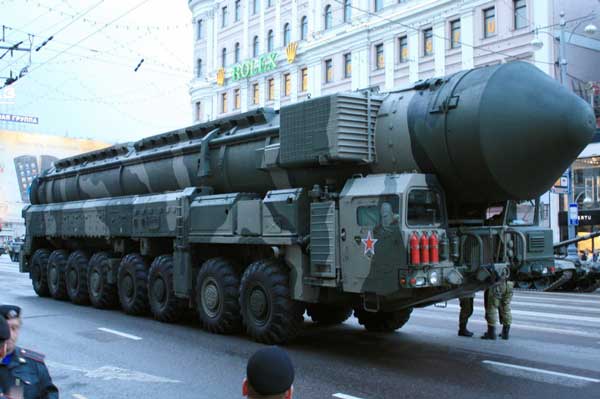 Russia is building so-called “doomsday weapons” that include powerful nuclear-tipped torpedoes and cruise missiles. In the report Nuclear Notebook, Russian Nuclear Weapons, 2021, researchers Hans M Kristensen and Matt Korda write that Russia’s nuclear weapons upgrade will cause major challenges for disarmament in the future. Although the number of strategic nuclear weapons has been steadily declining over the past two decades, Russia could quickly build more nuclear weapons, especially given the country’s huge stockpile of fissile material.

The role of nuclear weapons in Russian defense has varied since Russia inherited the Soviet Union’s role as a nuclear power in 1991. In the past year, Russia has become more open about its nuclear doctrine, which states that Russia will only use nuclear weapons if there are signals and evidence that Russia or its allies are being attacked, or aggression that threatens Russia’s existence. Russia believes that its nuclear weapons are only for deterrence and counter-attacks.

In connection with Russia starting a war against Ukraine in February 2022, Russian President Vladimir Putin threatened to use nuclear weapons. He expressed that any involvement in the war would have “consequences that you have never seen before in history“, something that the world community interpreted as a threat that Russia is not afraid of using nuclear weapons in the conflict. A few days later, Vladimir Putin put the country’s nuclear weapons on high alert and in a speech delivered to the nation on 21 September 2022, Mr Putin announced a partial mobilization of Russian military forces and made new and more explicit threats to use nuclear weapons “in the event of a threat to the territorial integrity of our country and to defend Russia and our people”.

Sources and other information

Nuclear Notebook: How many nuclear weapons does Russia have in 2022?, Hans M. Kristensen and Matt Korda
Nuclear Weapons, Who Has What at a Glance, Arms Control Association
Soviet Closed Cities, Atomic Heritage Foundation, 2017