The North Atlantic Treaty Organization (NATO) is a military alliance consisting of 30 member countries in North America and Europe. NATO’s highest decision-making body is the North Atlantic Council, which consists of representatives of all NATO member states. NATO headquarters is in Brussels.

The purpose of NATO was to protect the freedom and security of member countries by political as well as military means. The enemy used to be the communist Soviet Union and its allies, who in 1955 formed a similar military alliance, the Warsaw Pact, which was disbanded in 1991.

An armed attack on one or more of the member states is considered an attack against all NATO countries according to NATO’s founding document, Article 5. It is up to each member state to take decisions to defend other members under attack.

Nuclear weapons are part of NATO’s military strategy and through NATO, the US has long had nuclear weapons deployed in Europe. During the NATO summit in Lisbon in 2010, a new strategic document was adopted in which the relationship to nuclear weapons was clarified.

NATO and the NPT

It is a requirement for all NATO members to be members of the Non-Proliferation Treaty.

The US also believes that the non-proliferation agreement ceases to apply in wartime and the transfer of control of the nuclear weapons to the host country in the event of a possible outbreak of war would therefore be legal. However, the 1985 NPT Review Conference determined that the treaty applies in all circumstances.

In the early 1970s, there were approximately 7,300 nuclear weapons deployed in Europe. Protests from both civil society and governments meant that the number of nuclear weapons was reduced and at the moment it is about 100.

NATO’s nuclear weapons policy is based, among other things, on the concept of “nuclear sharing“. This means that nuclear weapons are located on the territory of nuclear-weapon-free states. “By promoting European stability, helping to deter threats related to the use of weapons of mass destruction and contributing to deterring the use of such weapons, NATO’s nuclear weapons policy serves not only the interests of Allies, but also partner countries and Europe as a whole,” it says read in the 2006 NATO manual. In peacetime, nuclear weapons are under US control and in the event of war, the US president could authorize the use of the weapons and transfer them for use to the host country. The host countries assist with their own warplanes, which must thus be able to carry nuclear warheads.

All of NATO’s deployed nuclear weapons are of the B61 type, which are intended to be dropped from aircraft as gravity bombs. The bombs fall freely and have poor accuracy. Of course, such weapons have little military value. The bombs, on the other hand, are considered to have had a political value and act as a deterrent. They are considered to constitute a kind of pledge that the United States is prepared to defend Europe. 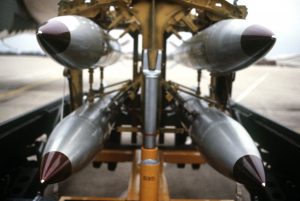 There is a modernization of all these bombs which will be deployed sometime between 2022-2024. The new bombs will be steerable and the bombs could then be given a military function to hit the adversary’s military targets, such as bases for missiles or combat command.

The new B61 bombs will be longer and cannot be delivered with the countries’ current fighter planes, but new planes must be purchased. These plans, both on the modernization of the B61 and on the need for new aircraft have met with resistance in the relevant NATO countries, not least because of the high costs of purchasing new fighter aircraft and because the bombs are considered to be outdated and pointless.