In August 1945, US President Truman gave the order to drop two atomic bombs on the Japanese cities of Hiroshima and Nagasaki. More than 230,000 people died as a result of the bombs’ immediate and long-term damage.

By the end of World War II, American air raids had destroyed the vast majority of Japanese cities. Hiroshima was one of the cities that was still unscathed. The city was an important port city with many Japanese soldiers, military areas and military factories that had not yet been exposed to American attack. Most adult men were at the front, so the population consisted mostly of women, the elderly, refugees and children who, from the age of 12, were mobilized to work for the armed forces. There were also slave laborers from Korea here. 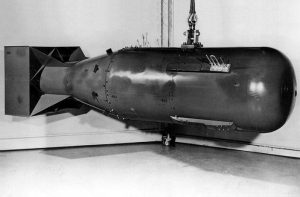 Early on the morning of August 6, 1945, the Enola Gay aircraft left the US-occupied Japanese island of Tinian. The Enola Gay was one of seven American planes that went to Hiroshima, but the only plane that was loaded with an atomic bomb. The bomb was over three meters long, 75 centimeters in diameter and weighed close to 4 tons. It contained 60 kg of uranium-235 and was named Little Boy.

At seven o’clock in the morning, Japanese radar indicated that an American aircraft was heading for Hiroshima, and warnings were issued by radio. Soon after, a civilian aircraft was seen, but no sign of bombers, whereupon the citizens of Hiroshima returned to their normal morning routines. When the radio stations issued another warning of incoming bombers at 8 o’clock, many ignored it as another false alarm.

At 08:15, Little Boy was ejected from the aircraft. The fall took 45 seconds before the bomb detonated about 580 meters above Hiroshima. It created an explosion with an explosive force of approximately 15 kilotons of TNT. The temperature at the moment of the explosion was so high that the surrounding air formed a huge fireball that measured over 250 meters. Survivors tell of the bright light that flashed and blinded several times brighter than the sun, closely followed by intense heat. 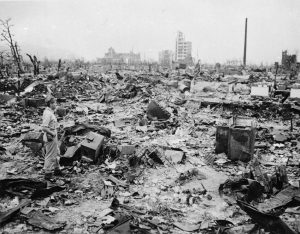 The resulting blast wave shattered windows more than 15 kilometers away from where the bomb struck and was felt up to 60 kilometers away. Within a radius of 1.6 kilometers the devastation was total. The heat from the explosion ignited hundreds of fires that together formed a massive firestorm. Within a radius of roughly ten kilometers, the fire destroyed everything it came across. A small part of the settlement survived, largely because Hiroshima is an earthquake-prone area and many important buildings had therefore been built extra strong to withstand severe earthquakes.

About half an hour after the explosion, it started to rain heavily. The “black rain” was full of dirt, dust, soot and radioactive particles that had been sucked into the air by the explosion and fires. Because of the fallout, even areas far from the explosion site became contaminated.

The soldiers of the Enola Gay looked down over Hiroshima after they dropped the bomb from the aircraft. The city had disappeared from view and the only thing visible was a massive black cloud of soot and strong flames. The co-pilot, Captain Richard Lewis, commented: “Oh my God, what have we done?“. But the crew returned to their camp and were received as heroes.

Confusion in the military

Confusion in Japan’s military headquarters was total. Chaotic reports came of “strange clouds”, “huge explosions” and “terrible flashes of light” and were met with total silence when trying to contact the military station in Hiroshima. Military headquarters knew that no major enemy attack had been made, it would have been visible on the radar screens. There were also no large stockpiles of explosives in Hiroshima. A pilot was dispatched to investigate what had happened and was eventually able to conclude that something terrible had happened. The Japanese military leadership was shocked: no one had believed that the United States had come this far in the development of nuclear weapons.

In total, up to 140,000 people in Hiroshima had died by the end of World War II as a result of the immediate and long-term damage of the bomb.

The bombing of Nagasaki has always been overshadowed by Hiroshima. The bombing of Hiroshima on August 6, 1945 went exactly according to the plans of the American military leadership. However, the US had decided to drop two atomic bombs on Japan, a uranium bomb and a plutonium bomb, but a few days apart. The second bomb was scheduled to be dropped on August 11 over the Japanese city of Kokura, while Nagasaki was the other option. But the US military leadership saw that bad weather was coming and decided to drop the second atomic bomb, called Fat Man, as early as August 9.

While the crew of the Enola Gay was still being celebrated for their post-Hiroshima successes, the crew of the second mission encountered problem after problem. A typhoon threatened the island of Iwo Jima which was supposed to be the starting point, so they had to move the starting point to the island of Yakushima. When the atomic bomb was about to be loaded onto the plane Bock’s Car, the crew noticed that only one of the fuel pumps on board was working.

This limited the aircraft’s fuel supply and the crew realized the risk that they would not be able to land safely after completing the mission before the fuel ran out. But there was no time to lose, if the Japanese were to be convinced that America’s second atomic bomb was not just an empty threat, they had to act quickly. 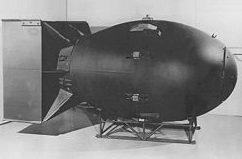 Fat Man was built with a core of plutonium, surrounded by high-explosive material which, when ignited, created the powerful nuclear reaction. Fat Man weighed over 4.5 tonnes, was 3.25 meters tall and measured over one and a half meters in diameter.

When the bomber reached Kokura, where the bomb was to be dropped, the city was covered in thick fog. The crew had no choice but to steer towards option two, Nagasaki. Nagasaki was chosen as a target primarily because of Mitsubishi’s two large steel and weapons factories located there.

Here, too, the cloud cover was thick, but the plane was running out of fuel and the decision was made to drop the bomb. At the last second, a crack opened in the cloud cover. At 11:02 in the morning, Fat Man fell over Nagasaki.

Fat Man exploded 43 seconds later, 469 meters above the ground. The bomb detonated with an explosive force equivalent to 21 kilotons of TNT and missed its target by almost 3 kilometers. The explosion in Nagasaki did not create as massive a firestorm as Hiroshima, but due to the explosive power of the bomb and the fact that it was dropped over a valley, the explosion itself was still more destructive to the immediate surroundings.

The destruction in the rest of Nagasaki was limited somewhat by the city’s many mountains and valleys.

However, this did not mean that the city was in any way spared. Three days after the atomic bomb was dropped on the city, an aerial photo shows Nagasaki as a flat, barren landscape, an obliterated city.

The area within a kilometer radius of the epicenter was completely destroyed by the heat and pressure wave created by the explosion. Buildings, plants and living things were pulverized. Within another one kilometer radius, close to 80% of all buildings collapsed.

Unlike the more modern Hiroshima, Nagasaki consisted largely of older wooden houses and generally weaker constructions. Windows and doors were smashed as far as 15 kilometers from the bomb site.

In total, over 90,000 people were killed in Nagasaki, and many of those who survived the bombing suffered from cancer and other genetic diseases years after the bombing.

The crew in the American plane Bock’s Car and in the accompanying reconnaissance plane saw a minute after the bomb was dropped a huge ball of fire. The pilots had to tilt the plane sharply backwards to avoid being hit. Five closely followed shock waves shook the plane and a radioactive cloud poured towards them. The plane was unable to continue to the island of Tinian and had to make an emergency landing on the island of Okinawa. After a dramatic landing, with barely 25 liters of fuel left in the tank, the battered crew was met with emptiness. No one was there to receive them and no ceremony awaited.

Before the bombs were dropped on Hiroshima and Nagasaki, protests came from unexpected quarters. Physicist Leo Szilard, who previously initiated the creation of the atomic bomb, started a petition among scientists against using the atomic bomb against Japan. 88 signatures were collected. But Szilard’s nomination was classified as secret and only made public in the 1960s.

140,000 people died from the bomb’s immediate and long-term damage.

Before the bombing of Nagasaki

After the bombing of Nagasaki