France declared itself a nuclear weapon state in 1960 and tested its first nuclear weapon in Algeria. It would take until 1992 for the country to join the Non-Proliferation Treaty (NPT), as a so-called “official nuclear-weapon state”. France is estimated to have around 290 nuclear weapons.

France has been a member of the NPT since 1992. Because France developed nuclear weapons before the NPT was negotiated in 1968, the country is defined as a nuclear-weapon state by the NPT. That means that France are allowed to keep their nuclear weapons while they pursued effective measures towards disarmament. The country joined the Comprehensive Test Ban Treaty (CTBT) in 1996. France is not a party to the UN Treaty on the Prohibition of Nuclear Weapons (TPNW).

When the United States intervened against France’s regional interests during the Suez Crisis of 1956, the belief that France needed an indigenous nuclear weapons capability in order to preserve its position in the world was confirmed. With the election of Charles de Gaulle as French president in 1958, the decision was made to develop nuclear weapons.

The first French nuclear test took place in 1960 near Reggane in the Algerian desert. France conducted 210 nuclear weapons tests up to 1996, with a hiatus between 1992–1995. These tests took place in Algeria and in French Polynesia in the Pacific Ocean. France’s nuclear weapons tests resulted in extensive radioactive fallout and had major consequences for the people living in the areas.

The French test explosions in the Pacific during the 1990s contributed to massive protests and boycotts of French wines. Read more under Nuclear Test Sites. 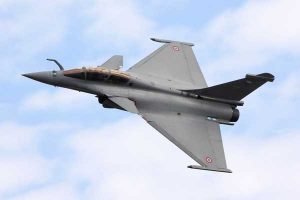 France’s other part of its nuclear arsenal is Air-launched cruise missiles delivered by aircraft. France the only nuclear weapon state to have nuclear weapons on aircraft carriers.

Between 2019 and 2023, France will spend 25 billion Euros on modernizing, maintaining and developing its nuclear arsenal.

France, along with the United Kingdom, has a very advanced program to develop and produce upgraded or completely new nuclear weapons without the need for test explosions. They have the capacity to produce miniature thermonuclear explosions in closed facilities – which does not count as nuclear test detonation, but is nevertheless a method of developing nuclear weapons.

Nuclear deterrence remains an important part of French defense policy and the country’s nuclear doctrine has been entrenched for generations, regardless of president. The use of nuclear weapons would be conceivable in extreme circumstances where it is a question of legitimate self-defense. France has a policy of not being the first to use nuclear weapons in a conflict, a so-called no-first-use policy. However, they could conduct a “final warning” with a limited nuclear detonation to deter or warn an adversary.

France is transparent with its nuclear arsenal and has for many years been open with both its nuclear forces and various exercises.

Although France is a member of the defense alliance NATO but is not involved in planning for NATO’s nuclear weapons, i.e the Nuclear Planning Group.

France tested its first nuclear weapon in 1961 and has 290 nuclear weapons in its arsenal. France’s test explosions in the Pacific led to massive protests internationally and French wines were poured down the drain.