India declared itself a nuclear weapon state in 1998, but as early as May 1974, the country carried out its first nuclear test, which was claimed to be a peaceful, non-military explosion. India currently has about 160 nuclear weapons in its nuclear arsenal.

India is not a member of the Non-Proliferation Treaty (NPT) and has not signed or ratified the Comprehensive Test Ban Treaty (CTBT). India is considered a de-facto nuclear weapon state as it developed its nuclear weapons after the NPT was negotiated in 1968. India is not a party to the UN Treaty on the Prohibition of Nuclear Weapons (TPNW).

Even though India conducted a first test explosion in 1974, it would take until 1998 before the country declared itself a nuclear weapon state. This was after a series of test explosions of nuclear weapons at the Pokhran facility in Rajasthan in northwestern India were carried out in 1998. It was also the start of a rearmament between India and Pakistan that is still ongoing today.

India’s nuclear arsenal is mainly based on missiles placed on nuclear-capable aircraft, land-based delivery systems, and sea-based systems. New submarines are also being developed which are said to be able to carry nuclear weapons. 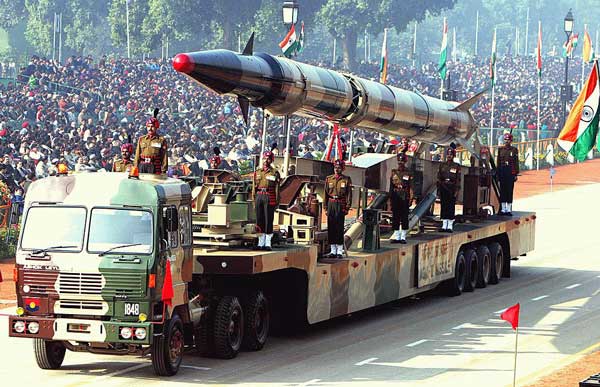 India’s nuclear ambitions and capabilities are increasing rapidly. India currently has eight different nuclear weapons systems and they are developing at least three more new systems. India also has large quantities of plutonium, enough to develop 150-200 nuclear weapons. The country is also on the way to developing a so-called nuclear triad, i.e. nuclear weapons on land, aircraft and submarines.

In 2008, although India is not a party to the NPT, India and the United States entered into an agreement that would give India additional access to nuclear technology and material not intended for its nuclear weapons program, but which India can use to further develop the program.

The conflict between India and Pakistan is considered a risk zone for the use of nuclear weapons and India’s primary target for its nuclear weapons has long been Pakistan. But all of the country’s new ballistic missiles have ranges that indicate their primary target would be China. It is also speculated among researchers that India has increased its preparedness in the last decade.