The climate effects of nuclear war are not primarily caused by the explosion or by the radioactivity, but by soot from the burning cities. After the explosion, a firestorm sweeps in and burns everything in its path. The smoke and soot from that huge fire rises into the stratosphere and from there spreads around the earth. The soot in the stratosphere stays there for years, and blocks the sun’s rays from reaching the earth’s surface.

Only a small number of today’s nuclear weapons would have to be detonated to bring about catastrophic climate effects for humans, animals, and the environment. The sunlight blocked by soot lingering in the stratosphere, drastically alters growing seasons for crops, which would ultimately deplete the global food supply and cause mass famine around the world.

Climate effects of a nuclear war

When a nuclear weapon explodes, local effects occur as a result of heat, radiation, fires, pressure waves and radioactivity. The secondary effects of a nuclear explosion– such as water and food poisoned by radioactivity, refugee flows, epidemics and social disintegration– can have greater consequences than the primary effects.

When a nuclear weapon detonates over a major city, massive fires break out over a large area. The fires occur simultaneously and, in many cases, will form a continuous burning surface. Above this surface, the heated air rises with great speed. This often results in a firestorm.

A “firestorm” is a fire so intense it creates its own wind, turning into a self-sustaining storm. Air is drawn with hurricane force into the city, heated by the fires and rises upwards. Oxygen deficiency occurs and the people who could possibly survive in deep shelters will suffocate.

During such fires, a very large amount of black soot is formed, mainly from burning layers of fossil fuels and from burning asphalt. Even ordinary organic material, for example trees, can form black soot when the fire takes place in a lack of oxygen. The soot is carried with the hot air up to black clouds at a height of a few kilometers.

In 1982, the renowned climate scientist and Nobel laureate Paul Crutzen presented studies of the climate effects of the amount of black soot that a major nuclear war between the US and the Soviet Union would release.

Paul Crutzen and John Briks state in their research “The Atmosphere after a Nuclear War: Twilight at Noon,” that the black soot would seriously affect the Earth’s climate. Temperature drops of 7-10 degrees and large changes in precipitation would cause most of the production of food on Earth to cease. With sunlight blocked from reaching Earth’s surface, we would be living in  a “Nuclear Winter,” without summer and therefore without growing crops. The effect was expected to wane and disappear after a few years.

The results of a nuclear war between the Soviet Union and the US meant that all people on earth would suffer starvation, poisoning and severe hardship. Most of humanity would perish, at least in the northern hemisphere. A large part of land animals would die off. There are no winners in this war.

Attacking with nuclear weapons is therefore suicide. “A nuclear war cannot be won and must never be fought,” expressed US President Ronald Reagan and the General Secretary of the Central Committee of the Communist Party of the Soviet Union, Mikhail Gorbachev in 1985. This was last repeated in January 2022 by the five official nuclear weapons states in a joint statement.

Even recent data on a nuclear war between the US and Russia shows a gloomy prognosis. Research shows that global temperatures would drop rapidly, causing a nuclear winter to last about a decade. The scientists call it a major climate trauma caused by black soot which would initially engulf the entire northern hemisphere and would spread down to the southern hemisphere after two weeks.

The global average surface temperature would decrease by 10°C, precipitation would change dramatically, and the growing season would be shortened. That would lead to a collapse of food production.

The smoke and dust from a limited nuclear war would cause an abrupt drop in global temperatures of 1–7° Celsius. Rainfall would decrease drastically and sunlight would be blocked from reaching the Earth’s surface. Sudden global cooling would shorten growing seasons, threatening agriculture worldwide. Rising food prices would make food unaffordable for hundreds of millions of the world’s poorest people. For those who are already chronically malnourished, just a 10 percent reduction in food consumption would lead to starvation. Epidemics of infectious diseases and conflicts over scarce resources would be widespread.

The ozone layer, which protects all life on Earth from the sun’s harmful UV radiation, would shrink, increasing the amount of UV radiation reaching the Earth’s surface. The consequence would be a manifold increase in the incidence of skin cancer in humans, an increase in malignant melanomas and eye problems, such as cataracts. Vegetation would also be negatively affected and marine life would be destroyed.

In the event of a regional nuclear war, agriculture would be affected by several climate factors, including changes in precipitation and temperature. A report on the climate impact of a limited nuclear war estimates that corn and soybean yields in the United States would be significantly reduced. A decline in wheat and rice production in China would be severe in some parts of the country.

In northern and central Europe, the growing season would be shortened. In Canada, wheat would fail to grow in the first year after a nuclear war.

The extent of yield changes for many important crops has not yet been accurately calculated. In many places, changes in precipitation can lead to large crop reductions caused by less sunlight and the shortened growing season.

In his piece “Nuclear Famine: Two billion people at risk?” Doctor Ira Helfand argues that these production losses would have particularly large global effects because the climate deterioration will be so long-lasting, perhaps up to a decade.

Around one billion people are currently at or close to the starvation line. In addition, many countries with large populations are completely dependent on the import of raw materials. In the event of a prolonged crop reduction, we can expect a large portion of grain exports to cease and grain prices to rise, catapulting millions– if not billions — more people into starvation.

Famine on this scale can itself be expected to trigger hunger riots, civil wars and escalating conflicts, in the ensuing struggle for resources.

The water is poisoned

A nuclear war would also mean that large parts of the water system in the attacked area would be destroyed. Open water sources, which are used for water supply, would be contaminated by radioactive fallout and could become dangerous to drink or use.

Ten years after the Chernobyl meltdown, Cesium, a reactive element that is, among other things, a by-product of nuclear power plant reactors, was still being measured in the seas of Northern Europe ten years after the accident, including the Baltic Sea. Radioactive substances in lakes and streams, contaminate both the water and the wildlife inhabiting them.

Radioactive particles cannot be boiled or purified from drinking water using chemical water purification methods. The safest option is for survivors to try to find drinking water as far from the explosion site as possible, preferably in deep, covered wells and water reservoirs. 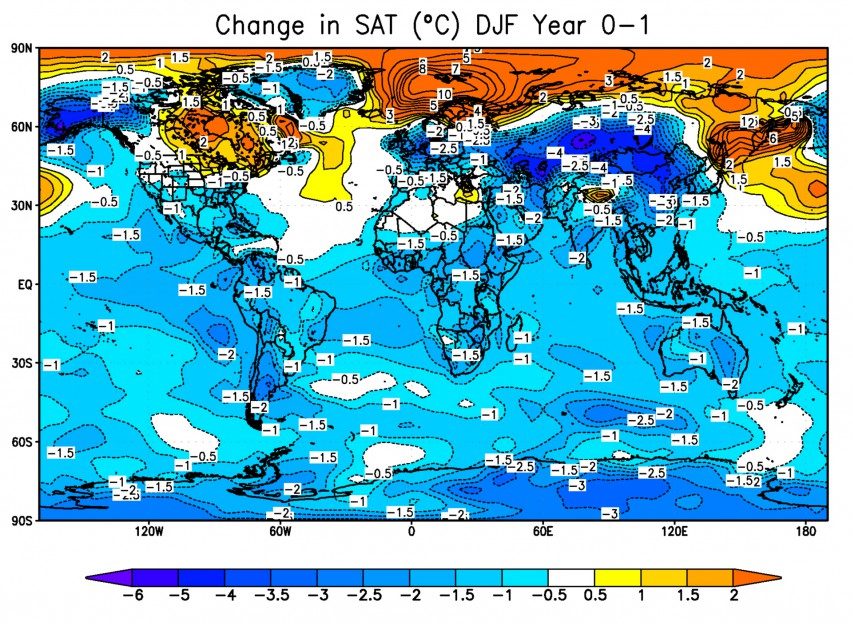 Picture above: The temperature distribution over the northern hemisphere’s winter after a “limited” nuclear war between India and Pakistan when 5 million black soot was formed. The image has been made available by Dr. Alan Robock. 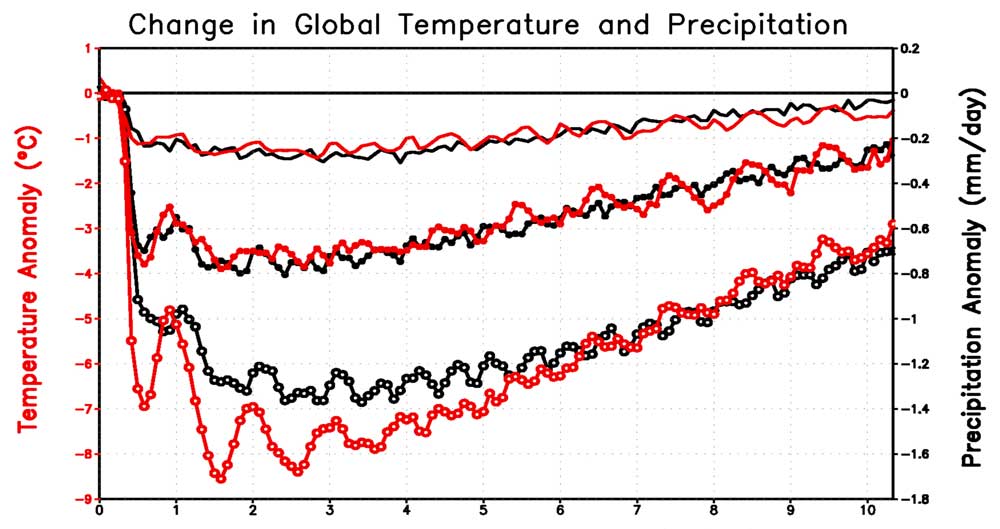 Are the calculations reliable?

All predictions about the future development of the climate naturally contain uncertainties. But even if the results can be uncertain, or in some cases assumed to be based on a so-called worst possible scenario, it is important that this research exists to show the various problems that would arise. The consequences could be vastly more serious, or they could be milder.

By “firestorm” is meant that the fire creates its own storm. Air is drawn with hurricane force, heated by the fires and rises upwards. Oxygen deficiency occurs and the people who could possibly survive in deep shelters will suffocate.