Accidents happen and mistakes happen, even when it comes to nuclear weapons. Nuclear weapons have been dropped into the sea, fully loaded planes have crashed, firing silos have burned, and radar systems have mistaken a rising moon for a Soviet attack.

Right up until the mid-1990s, American bombers with several nuclear weapons on board were constantly in the air. If such an aircraft had navigated incorrectly and entered Russian airspace, in a tense situation between the US and the Soviet Union, a disaster could have occurred.

‘Eric Schlosser writes in his book Command and Control: Nuclear Weapons, the Damascus Accident, and the Illusion of Safety, about a large number of mistakes and accidents in the handling of nuclear weapons in the United States. Nuclear weapons have been dropped from aircraft, or crashed with the aircraft. These accidents did not in themselves pose a threat of nuclear war, but an accident resulting in a nuclear explosion in the context of a threatening international situation would greatly increase the risk of mistakes.

During the Cold War, the United States and Russia developed a so-called “launch-on-warning” system, which means that both states have advanced warning systems to be able to identify a hostile nuclear attack and respond to it with a counterattack before their own territory has had time to be hit.

The claim that nuclear weapons can be kept forever without ever being used – intentionally or accidentally – is not credible. This is also the conclusion of the Canberra Commission’s 1996 report.

The responsibility for life and death

In addition to the technical problems that can give rise to false alarms, there is also the human factor. Nuclear attack warning systems, like control systems at nuclear power plants, must be manned 24/7. Many major accidents occur at night, as a result of fatigue and boredom.

It is easy to make mistakes. We jump on the wrong bus, dial the wrong number on the phone, or forget to call and congratulate mom on her birthday. But when it comes to entering the wrong numbers into an aircraft’s navigation system or turning off the wrong monitor in a surveillance system – then the consequences can be catastrophic.

A retired Soviet naval officer who spent many years in command of a nuclear-armed submarine has recounted: During the long periods when we were patrolling deep in the sea, often for weeks at a time, I rarely slept more than a couple of hours a night. Several days in a row I stayed on the command bridge, staying awake on coffee and vodka. Sometimes I was so tired it was hard to see which lights were green and which were red on the dashboard. And yes, during this time my crew and I had the capability to launch missiles with more than a hundred nuclear warheads.

Today, both the United States and Russia still have parts of their nuclear arsenals on what is called “hair-trigger alert”, i.e. nuclear weapons that are ready to be fired within a few minutes. This means that a single human error; a single thoughtless action can have immediate and devastating consequences.

Early on the morning of November 9, 1979, four American command centers received signals that a full-scale nuclear attack by the Soviet Union was on its way. Within six minutes, massive preparations were made for a counterattack. Until it was discovered that it was a false alarm caused by a Soviet nuclear strike training program accidentally entering the US surveillance system.

The “hot line” established in 1963 between the US and the Soviet Union to avoid false alarms causing a massive nuclear strike was not used during those panicked six minutes.

Stanislav Petrov: The Man Who Saved the World – 1983

Twice in 1983 we came close to a world-destroying nuclear war between the Soviet Union and the United States. We knew the danger was great, but in retrospect we have understood that it was greater than we knew at the time.

In his infamous speech in March 1983, President Ronald Reagan spoke of the “Evil Empire” in a way that deeply wounded the Russian leadership and was seen as the end of the period of mutual caution that had existed since the Cuban Missile Crisis.

In the Soviet Union, many were convinced that the United States would attack. Peter Handberg tells in his book Shadows of Doom that he met men who watched over the places in the Baltics where the intercontinental missiles rested. These men not only worried about, but actually seem to have believed, an American nuclear strike would occur and were prepared for the order to launch.

In Moscow, the Politburo of the Communist Party and the country’s leadership prepared a counterattack. The head of the KGB spy agency, General Ileg Kalunin, had sent orders to his agents around the world to watch for any signs of plans for a major attack on the fatherland. The KGB chief counted “sticks”, signs that the attack was being prepared. When a certain number of “sticks” were collected, the attack was safe.

The Soviet Union was led by Yuri Andropov, who had previously been head of the KGB. He was seriously ill and was treated on chronic dialysis. Andropov was responsible for giving the order “Fire the nuclear missiles”.

The international situation was very tense. The Soviet Union and the United States both carried out a major rearmament of medium-range missiles intended for the “European theater”. The US program “Star War” caused the Russian military to worry that the US would gain a first strike capability, and be able to destroy or stop all Russian nuclear missiles.

Tensions rose when a Korean passenger plane was shot down by a Soviet fighter on September 1.

The increased risk of war was felt strongly by those in the Soviet Union who were responsible for being prepared for an incoming attack. A facility located in the military closed city of Serpukov-15 was central to the system. On September 26, 1983, Lieutenant Colonel Stanislav Petrov was ordered to take command of the monitoring center for the next 24 hours when the officer who was supposed to be on duty was ill. In the evening the alarm came. The computer screens showed that a missile had been fired from the American West Coast. One launch, then another, finally four missiles. The computer judged that there was now the highest degree of probability for a seizure.

Petrov was now, according to the instructions he himself helped to draw up, immediately report further that an American attack had been discovered. He appears to have made an attempt to report but the officer he reached was possibly drunk and did not take the matter seriously. Petrov would then have called the next instance. He decided to wait, despite his orders. He knew what the consequences would be if he reported. The war would mean the annihilation of the United States and the Soviet Union and perhaps humanity. He was waiting for more information.

Was it strange that the US fired only a few missiles? And why couldn’t the satellites see the missiles themselves? Petrov was very well versed in the functions of the facility, as he was one of those who developed the computer system. He realized that the system was not perfect. Maybe it was this special knowledge that saved us? Or the unusual independence and judgment of an ordinary person? 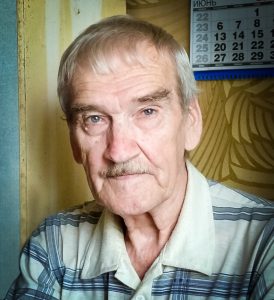 Stanislav Petrov, the man who saved the world, 2016

Then came the explanation: Mistakes in the computer systems. You could breathe out. The incident only became known when a superior who had criticized Petrov’s lack of record keeping was on his deathbed. Petrov has received very little attention in Russia.

Two months after the Petrov incident, NATO held an exercise, Able Archer, that was perhaps even closer to causing world-destroying nuclear war. Some of the events have been known to many military and politicians in Russia and in the United States, but it was only when the organization Nuclear Information Service in 2013, with the support of the Freedom of Information Act, gained access to some of the classified American documents that we learned about the progress. Important documents from the US and the UK and especially from Russia are still not available. Why do authorities “protect” us from the knowledge of the biggest threats we have been exposed to?

Able Archer was a NATO exercise conducted in early November 1983. The exercise was intended to simulate a nuclear attack that would stop a Soviet attack. Around 40,000 soldiers took part in the exercises and large troop movements took place.

This staff maneuver did not differ in principle from similar exercises in previous years. It could be followed to some extent by Soviet signals intelligence. What was new was that the tension between the great powers was stronger than before.

In the background was the Soviet operation RYAN, an acronym for nuclear missile attack. This had been adopted by the Russian KGB two years earlier and meant that a nuclear attack from the United States was expected. Here was a deadly combination of Reagan rhetoric and Soviet paranoia. Orders had gone out to all KGB agents to report activities that might indicate an attack was being prepared.

Soviet leaders worried that the Able Archer exercise could be a parallel to Hitler’s Operation Barbarossa, the military maneuver during World War II that suddenly became an attack on the Soviet Union. The Soviet Union ordered nuclear-armed bombers to be on high alert with pilots in place in the cockpit. Submarines with nuclear weapons were sent under the Arctic ice. Missiles of type SS-20 were made ready for launch.

The exercises were concluded by NATO with an order to fire nuclear weapons at targets in the Soviet Union and Eastern Europe. But no missiles were fired and the participants from NATO countries were able to go home. 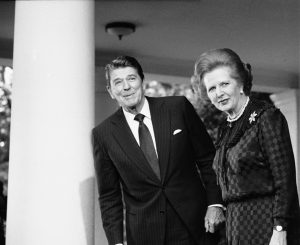 Ronald Reagan and Margaret Thatcher in the White House in 1982.

British Prime Minister Margaret Thatcher received information after the exercise about how seriously the situation in Russia had been misunderstood and that a NATO exercise had come close to leading to a nuclear war. She conferred with President Ronald Reagan.

It is likely that this information, along with the impact that the movie “The Day After” had on the old actor Reagan, contributed to the “repentance” expressed in his State of the Union message in 1984: “A nuclear war cannot be won and must never be fought”. Reagan continued this development until the famous meeting in Reykjavik in 1986 where he and President Gorbachev, for one day, agreed to abolish nuclear weapons before the year 2000.

In 1995, Russia came close to ordering a nuclear launch. The Russian warning system received signals that a rocket had been fired off the Norwegian coast, and the Russian military suspected that it was a US nuclear missile fired from a submarine aimed at Moscow.

During the process, President Yeltsin had time to open his nuclear bag with the codes for launching Russian nuclear weapons. Just over five minutes later, it turned out that the rocket was traveling in a different direction and the alarm was sounded. The missile was Norwegian, and had been fired for research purposes. Norway had warned 35 countries, including Russia, that the launch would take place. But the message had not reached the people who worked with the warning system.