Nuclear weapons are the collective name for bombs that derive their power from a nuclear reaction and are the most powerful weapons ever created. The tremendous effect of nuclear weapons is based on the release of the energy that holds atomic nuclei together.

The strength of a nuclear charge is given as the number of tons of TNT, (conventional chemical explosive) that produces the equivalent explosive power of conventional bombs, such as explosive or incendiary bombs. 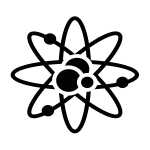 Atoms that form the basis of nuclear weapons are very small, so small that it is difficult to imagine. In a nuclear explosion, a very large number of atoms are split in a chain reaction, the more atoms that are split, the more powerful the explosion.

There are two main types of nuclear weapons. The first is the atomic bomb. In the atomic bomb, energy is released through fission of heavy atomic nuclei, for example uranium and plutonium. The second bomb is the hydrogen bomb, or thermonuclear bomb. In the hydrogen bomb, the release of energy takes place through a merger (fusion) of light atomic nuclei, for example isotopes of hydrogen.

More simply explained is that heavy atomic nuclei of uranium or plutonium split when they are hit by neutrons. For this to work, a certain size of the charge is required, otherwise too many neutrons escape and the chain reaction stops. This size is called “critical mass”, for uranium it is about 25 kilograms and for plutonium about 6 kilograms.

The substances used in fission bombs are uranium-235 and plutonium-239. These substances have the property that they are split by relatively slow neutrons, so-called “thermal neutrons”. The products of the fission process are a number of different substances, many of them radioactive isotopes of krypton, barium, iodine-131, cesium and strontium.

What is commonly known as a hydrogen bomb or thermonuclear bomb is in fact three atomic bombs assembled to provide, in principle, unlimited explosive power. A fission bomb (made of uranium or plutonium) is limited by the fact that it is split by the explosion so that the chain reaction takes place in only one part of the material.

To get around this, the superpowers in the 1950s developed a design in which the blast effect was not limited in the same way. In this type of bomb, a plutonium bomb is triggered first – this produces a temperature of millions of degrees, setting off a fusion bomb in which hydrogen atoms (deuterium and tritium) fuse into helium atoms, while bursts of high-energy neutrons are emitted. These neutrons hit a shell of U-238 (the uranium isotope not split by thermal neutrons) and the energy in the neutrons is enough to fission the U-238 nuclei, developing additional energy. In other words, most of the energy development is in the blowing up of the casing, while the hydrogen part serves mostly as a primer for this.

Fusion occurs when light substances, such as hydrogen nuclei, fuse together to form heavier substances, releasing energy in the process. For this to happen, high temperatures and pressures are needed. In stars, nuclear fusion occurs in the star’s interior, and this is its source of energy.

Of the nuclear weapons in existence today, the vast majority are hydrogen bombs. The Tsar bomb is the largest hydrogen bomb ever tested. This test was carried out in 1961 by the Soviet Union in Novaya Zemlya and had a yield of about 5o megatons (Mt), the equivalent of about 4 600 Hiroshima bombs.

The neutron bomb is a nuclear weapon in the form of an atomic or hydrogen bomb modified to reduce explosive power and maximize radiation. Neutron bombs have been considered particularly destructive because the reduced blast wave makes buildings and infrastructure more resistant, while the increased radiation kills living creatures.

Neutron bombs are said to make most sense to use against targets that survive the blast but are sensitive to radiation – for example, armored objects.

There have been major protests against the possession of neutron bombs and many countries that had these weapons have got rid of them. However, there are suspicions that Israel still has neutron bombs in its nuclear arsenal

When measuring the effect of a bomb, the total amount of energy released by the explosion is measured. In the case of nuclear weapons, it is measured in terms of how many kilograms of TNT it would take to release the corresponding amount of energy. TNT is an explosive used by the military.

To get a better idea of what these figures mean, let’s see how many conventional bombs it would take to release the same amount of energy as a small nuclear weapon, less than the bomb dropped on Hiroshima which was 15 kilotons of TNT. A nuclear weapon with an explosive power of 10 kilotons of TNT weighs about 500 kg, while a conventional bomb of the same weight contains about 250 kg of TNT. Such a relatively small nuclear weapon releases as much energy as 40,000 equally heavy TNT bombs.

If the explosive power of a nuclear weapon is likened to a spoonful of liquid, it would take about 200 cups of coffee, poured out at the same time, to achieve the same explosive power with conventional weapons.

The atomic bomb is built on a chain reaction that releases as much energy as possible, as quickly as possible.

A hydrogen bomb or thermonuclear bomb is actually three atomic bombs that are combined to give, in principle, an unlimited explosive power.

The neutron bomb is a nuclear weapon that has been modified to reduce the explosive effect and maximize the radiation. The reduced pressure wave makes buildings survive better, while the increased radiation kills living things.