For 20 years, work was carried out at Khan Research Laboratories to develop a uranium enrichment program for nuclear weapons. With help from Canada, China and France, Pakistan gained the capacity to rapidly assemble a nuclear weapon in the late 1980s.

In May 1998, after India’s nuclear test, Pakistan carried out a series of nuclear tests over a two-day period to prove its nuclear capability. Abdul Kadir Khan, who was the mastermind behind Pakistan’s nuclear weapons program, later ran an extensive trade in nuclear materials and information on the black market. He did business with, among others, Libya and North Korea.

The country has received a lot of criticism for one of their short-range missiles, which has a range of only 60-70 kilometers. This is considered controversial as the target is clearly strategic objectives in India. Pakistan has responded to the criticism by saying that the missile was developed to be able to provide a quick response to a possible attack or threat and that the missile has a deterrent purpose. 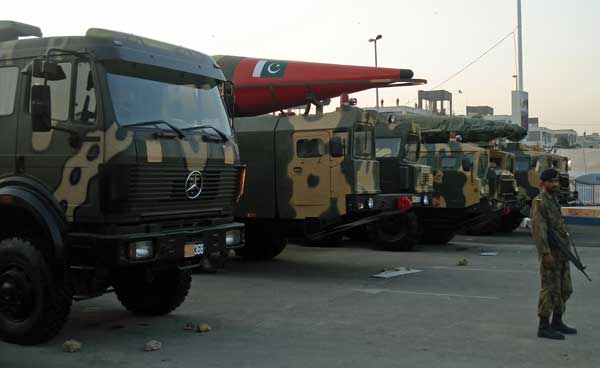 Pakistan is developing and improving its nuclear weapons capability at a rapid pace. It is reasonable to assume that development will continue at the same rapid pace in the future, especially if the country wants to keep pace with neighboring India, which has plans to deploy a nuclear triad consisting of air, land and sea-based nuclear weapons.

The upgrade of the country’s nuclear arsenal is mainly various missile systems, specifically cruise and short-range ballistic missiles. It indicates that Pakistan is now seeking to develop a wide range of missile systems intended for the battlefield and for use against an outside aggressor, most likely India.

Pakistan is developing and expanding both the production of plutonium and depleted uranium in order to strengthen its nuclear arsenal. According to scientists, Pakistan may increase its nuclear arsenal to 220-250 nuclear weapons by 2025.

Pakistan does not have an official nuclear doctrine, but sees its nuclear weapons as its most precious and important asset to protect the country’s security. A former Pakistani general has expressed: “Oxygen is essential to life and no one questions its desirability – nuclear weapons have taken over the life-saving feature for Pakistan”.

Pakistan’s nuclear weapons have long been entirely concentrated on neighboring India – both militarily and politically. This is both to be able to deter above all a conventional attack from India and to respond to a possible attack with nuclear or conventional weapons. The development of tactical nuclear weapons with a short range is criticized by the outside world who believe that it can lower the threshold for the use of nuclear weapons.

Pakistan has not stated any promise never to be the first country to use nuclear weapons against another country. This is suspected to be because Pakistan is inferior to India in terms of conventional forces and therefore wants to maintain the deterrence of being able to respond to a conventional attack with nuclear weapons. The current development with the trend towards a greater number of missile systems could possibly be interpreted as a response to India’s nuclear doctrine.

Pakistan tested its first nuclear weapon in 1998 and has around 165 nuclear weapons in its arsenal today. Pakistan is developing its nuclear arsenal at a rapid pace. It is not a member of the Non-Proliferation Treaty and is not recognised as having nuclear weapons under the Treaty.